The Harvard Medical School-based Center for Cancer Systems Pharmacology is an NCI Cancer Systems Biology Center of Excellence that studies responsiveness and resistance to anti-cancer drugs. The Center focuses on targeted small molecule therapies and newly emerging immune checkpoint inhibitors (ICIs), two cornerstones of precision cancer medicine. Center members are trying to identify which patients will benefit from each class of drugs and why cancers that are initially drug-sensitive often become resistant. The Center also studies drug toxicity, with the aim of reducing the burden of therapy for individual patients.

Our research is performed using a mix of experimental and computational approaches and follows a bedside to bench and bench to bedside paradigm. We are committed to the generation of reproducible and publicly accessible data and to open-source software.

Project 1
Multi-scale modeling of adaptive drug resistance in BRAF-mutant melanoma.
We construct computational models that capture and ultimately explain the origins of responsiveness and resistance to RAF/MEK inhibitors in melanoma. This class of drugs (which includes vemurafinib, dabrafenib, cobimetinib, and trametinib) represents a triumph of targeted cancer medicine and often induces dramatic tumor shrinkage in patients with BRAF mutant melanoma. However, response is usually transitory and many individuals develop drug-resistant, resurgent disease. We are attempting to understand the initial steps in the emergence of resistance, which are based on reversible adaptive changes in tumor cells, as well as the contributions of adaptive resistance to the emergence of fully resistant tumor cell clones. The projects involves collecting time-series single-cell and population-level data from cells with diverse genotypes followed by temporally resolved modeling using differential equations, logic-based models, and supervised machine learning. These studies are performed primarily in cell lines and mouse models but are informed by data from patients. 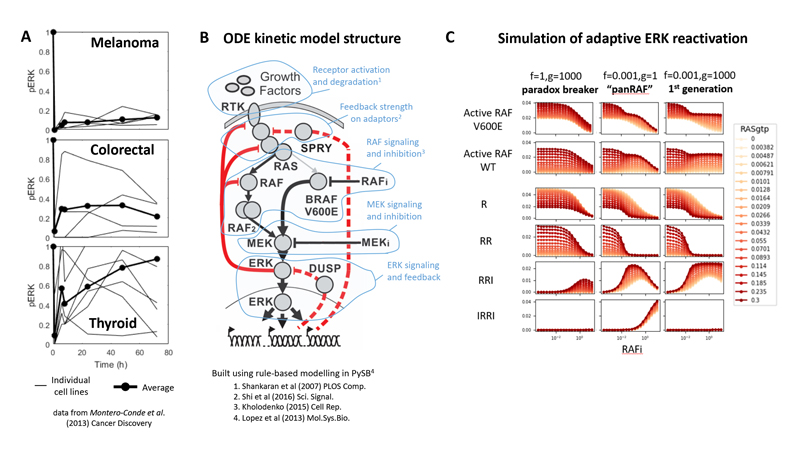 Kinetic modeling of adaptive drug resistance in BRAF-mutant cancers.
A) Adaptive ERK reactivation in BRAF-mutant melanoma, thyroid and colorectal cancers.
B) Structure of the kinetic model explaining adaptive ERK reactivation in BRAF-mutant cancers.
C) Simulations predicting the efficacy of different classes of RAF inhibitors (1st generation, paradox breaker and pan-RAF inhibitors) on adaptive ERK reactivation.
Project 2
Measuring and modeling the tumor and immune microenvironment before and during therapy and at the time of drug resistance.
Nascent tumors are under continuous surveillance by the immune system and suppression of this surveillance is one of the key steps in the development of malignancy. Drugs acting as immune checkpoint inhibitors (ICIs) restore anti-tumor immunity and result in very durable responses (potentially even cures) in some diseases. The key to understanding why ICIs work in some tumor types and not others is understanding a complex tumor milieu (the tumor microenvironment; TME) in which tumor, stromal and immune cells interact. We are exploiting highly multiplexed imaging methods to immuno-profile tumors from patients before and after treatment with ICIs or other therapeutic drugs. The precise proportions and spatiotemporal arrangements of tumor, stromal and immune cells are being measured in tissue biopsies, and single-cell features extracted and associated with disease progression and therapeutic response using machine learning, deep learning and high-dimensional data analysis. Adverse responses in the skin and gut are also being investigated and compared to therapeutic responses at a mechanistic and clinical level. In this case, the aim is to reduce the burden of ICI therapy on individual patients. 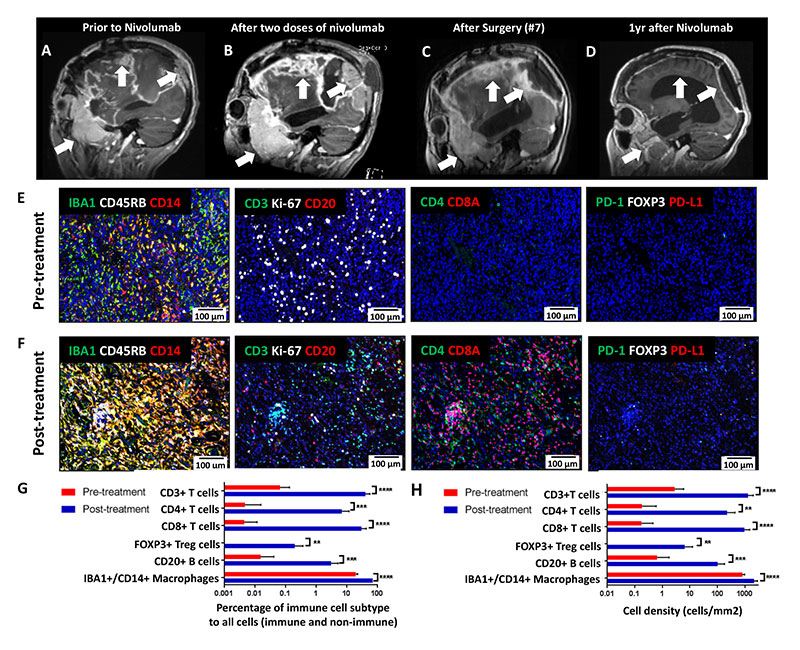